The People and Lands of Christ Church Easton

As the Civil War began, white Fairfield county residents remained divided on just how much they were willing to sacrifice to defeat the South (and end slavery). Local industries that had extensive trading ties in the South were hindered by the wartime embargo. Many who had rejected the abolitionist call for an immediate end to enslavement, now called for an immediate peace (without ending enslavement or defeating the Confederacy). Following the stalemate at Bull Run in July of 1861, viewed as a Union defeat, Peace and Confederate flags alike hung from Easton. Meetings in Monroe and Redding were held calling for a “Peaceful separation.” As such so-called peace activism accelerated, the Bridgeport Republican editor expressed his concern to the then Governor, “I am becoming alarmed at the condition of things in this part of the State. Rebels-& very active ones-can be found without going south of the Mason & Dixon line. In other words, we have open traitors at home.” Reportedly, military grade force was needed to collect taxes. Armed meetings led to face offs, and though ultimately Unionist sentiment prevailed, the peace flags and antiwar disruptions surfaced throughout the war (Reeve et al. 2009; Warshauer 2011, 2013, 2021).

During the Civil War, divides were not merely political but also religious. Though other denominations like Methodism would split along sectional lines, the Episcopal church remained united and committed to a gradualist stance on enslavement, with some leaning heavily towards pro-enslavement arguments. In 1861, the then Bishop of Vermont John Henry Hopkins published a pamphlet, “A Scriptural, Ecclesiastical and Historical View of Slavery” to defend enslavement. In this work, Hopkins, who would become the presiding Bishop of the national Protestant Episcopal Church after the war, argued biblically and speciously in favor of enslavement and white supremacy that “every candid observer agrees that the negro is happier and better as a slave than as a free man, and no individual belonging to the Anglo-Saxon stock would acknowledge that the intellect of the negro is equal to his own” (Register 2020).

Outraged, a few white northern Episcopal clergymen and bishops published their dissent arguing instead that the Bible condemned enslavement as a sin. At least one dissenter, however, still did not feel comfortable revealing his name or location as he did so. Interestingly, in a manuscript note of a copy of this pamphlet held at Yale University’s Beinecke Library, the pamphlet, “Bishop Hopkins’ letter on slavery ripped up; and his misuse of the sacred scriptures exposed,” is attributed to “Rev. David G. Tomlinson, Ct.” This very clergyman had served at Weston’s Episcopal Society from 1835-1840. Should the note be accurate, no wonder then that the clergyman refrained from publishing his name; he had borne witness to the mob rule of these parts and undoubtedly remained aware of the continued pro-slavery sentiment in Connecticut-and Fairfield county in particular- during the war (Register 2020; Worldcat.org record).

Though the Civil War was fought over slavery, for most Connecticut whites, the war was not to end enslavement but rather prevent the perceived aggression of the Slave Power. As one Connecticut soldier asserted, “The negroes glorify us into saints [yet]…This army will not fight for slavery; the war is a war for liberty.” The 1863 Emancipation Proclamation that ended slavery in Confederate states elevated the stakes and deepened northern division. When the draft went into effect, New York whites rioted, targeting known abolitionists and Black communities. In Connecticut’s gubernatorial race of 1863, the peace Democrats gained momentum though ultimately losing. Others in Connecticut sought simply to resist the draft. Though 1,303 men were drafted in Connecticut in 1863, 913 were exempted through medical certification, suggesting a loose practice of exemption for more reasons than simply the medical (Warshauer 2011; Warshauer 2013).

In contrast, for Connecticut Blacks, the 1863 Proclamation had changed everything. Emancipation was followed by opening Union forces to Black enlistment. In Connecticut, after many debates and opposition from racist contingents who feared the arming of Black men and its significance for projects of racial equality, the 29th Colored Regiment would be commissioned on March 4, 1864. 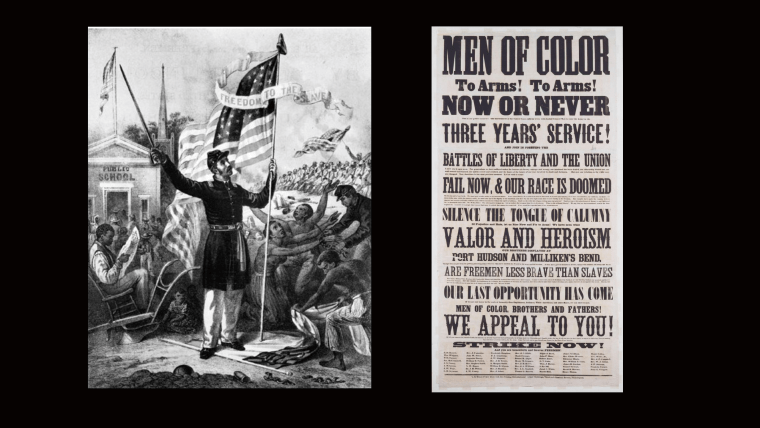 Overall, just 47% service-aged men (between ages 15 and 50) would join the Union Army. In striking contrast, 78% of eligible Black men enrolled (Warshauer 2021). Three Easton born individuals enlisted in Connecticut’s 29th Colored Regiment including George Baldwin, Michael Burr Nichols and Isaac A. Nichols. At the time of his enlistment George Baldwin, of the aforementioned and long-standing Eastonine family, was an 18 year old farmer. Burr Nichols was a 28 year old laborer, and Isaac Nichols was 19 years old (Connecticut State Library Index; Boyce, 2021). They likely were motivated by both moral and economic incentive–a $300 sign up bonus was promised in addition to the chance to fight for the end to enslavement. (Boyce, 2021)

They would have been among those encamped in Fair Haven in New Haven and addressed there by the self-liberated (formerly enslaved) famous abolitionist, rhetorician and writer, Frederick Douglass. He charged them,

As Douglass viewed, it, having encouraged his own sons to enlist in the Massachusetts 54th, Black soldiers fighting in the Civil War would mean not just the end to enslavement and ultimate victory for the Union, but likewise necessitate the realization of the promise of equality for all (Hawley 2015).

Though the dream persisted, the brutalities of war and racism took their toll. Isaac Nichols would be court martialed for deserting. His account reflected the still insecure status of Black Americans within Easton. Reportedly, the previous deputy sheriff George Wheeler had sought to profiteer and, without sanction, offered Isaac’s mother his release for the fee of $200. Wheeler had given Isaac $25 telling him to ‘clear out,’ falsely assuring approval. Both Michael Burr Nichols and George Baldwin suffered from a war modern for its capacity for killing, yet undeveloped in its capacity to treat the wounded or contain disease. Indeed, disease put the former in the hospital until discharged for his acquired rheumatism. George Baldwin, too, spent months in the hospital following a spine injury until he was discharged with documented disability that prevented future labor. Still four other individuals in the 29th were credited to Easton, reflecting dubious practices whereby in order to count an individual in the town quota and avoid further conscription of white townspeople, they would offer to pay individuals extra for enlisting under their town’s moniker. (Boyce, 2021)

Though 1865 would bring the end to the Civil War and enslavement, it would by no means end of racial inequality. The project of Reconstruction would achieve lasting impact in terms of public education and the passage of the 13th (abolition), 14th (equal rights before the law), and 15th Amendments (universal male suffrage), but after a decade the people abandoned their will to enforce its aims and pursue the moral cause of racial equality. In its wake, a reign of white terror and Jim Crow segregation would be instilled in the South. Likewise, in the North, de facto segregation would be achieved through the promotion of racist ideology and inequality and the threat of white violence. As will be explored in our next and final article of this series, these forces would dominate this area through the 20th century and lay the ground for problems of systematic racial injustice facing us still today.

A word on citations: Our historical investigation draws widely from over eighty secondary and primary sources (see here for a full bibliography). We are especially indebted to Stuart Reeve, David Silverglad, and Kathleen von Jena’s 2009 Historical Archeological Assessment and the Vincent J. Rosivach Register of Slaves in Fairfield, Connecticut.

5/20/22 Update: The original publication failed to include the credit to Elizabeth Boyce for her important work previously published in this paper (“Pioneers of Liberty: Easton’s Soldiers in Connecticut’s 29th Colored Regiment,” 2021), an error for which the author sincerely apologizes. This article relies heavily on her original work discussing local Black soldiers of the Civil War, as well that of Matthew Warshauer.